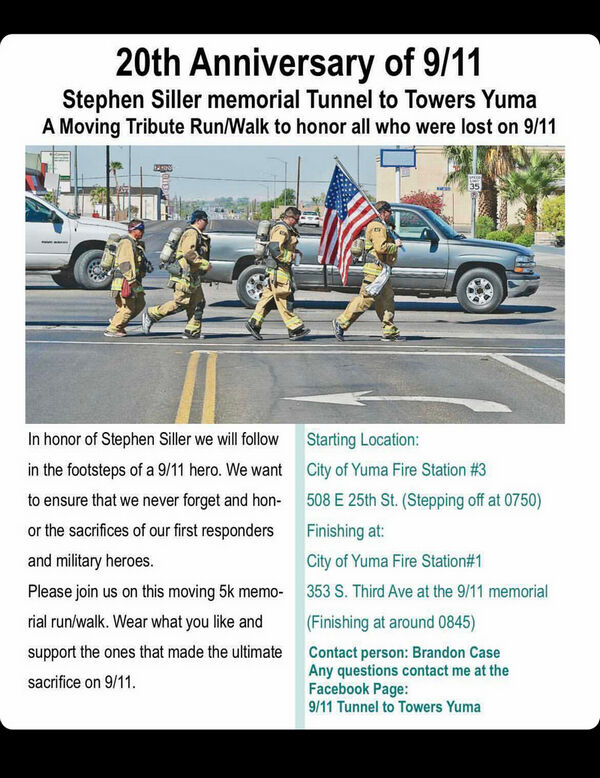 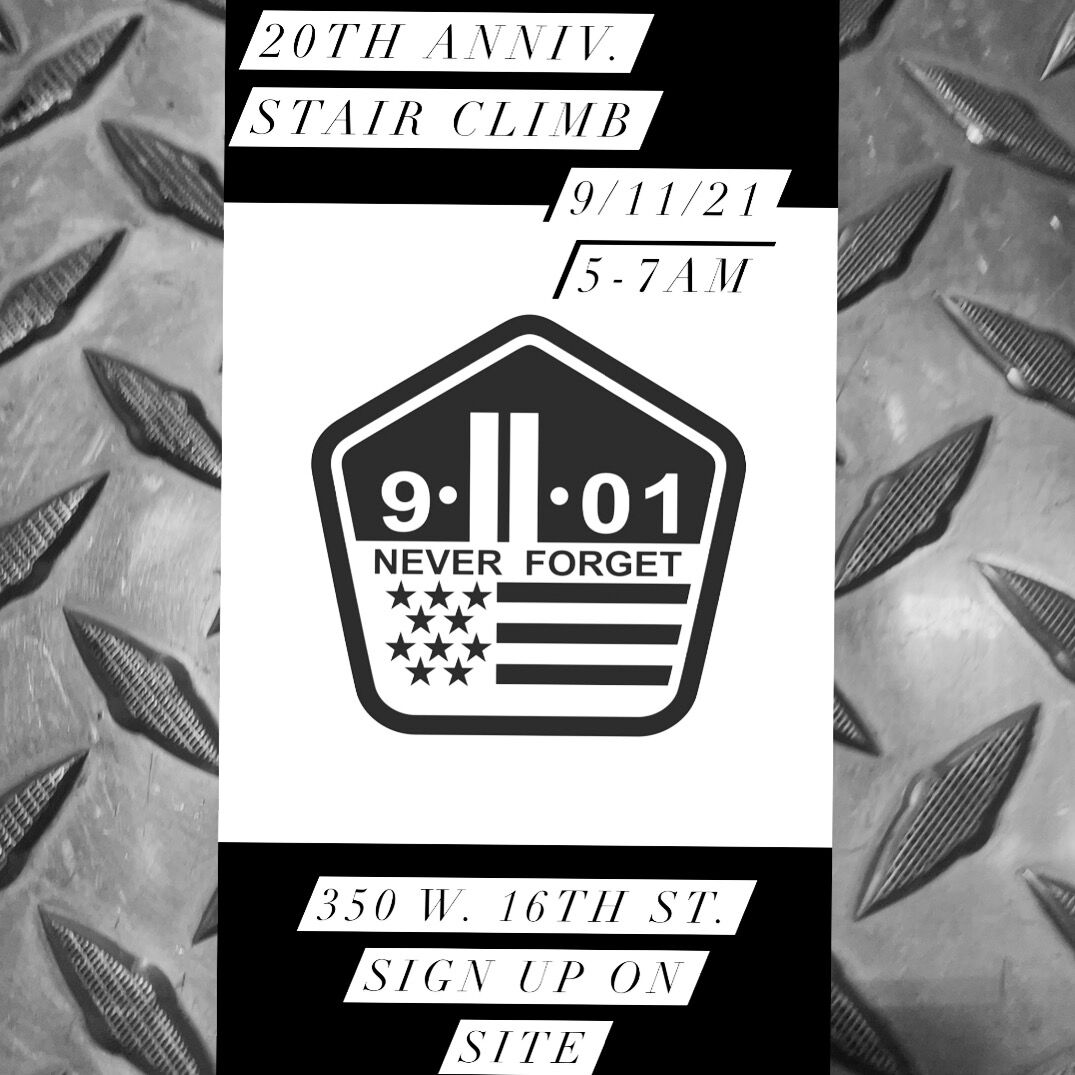 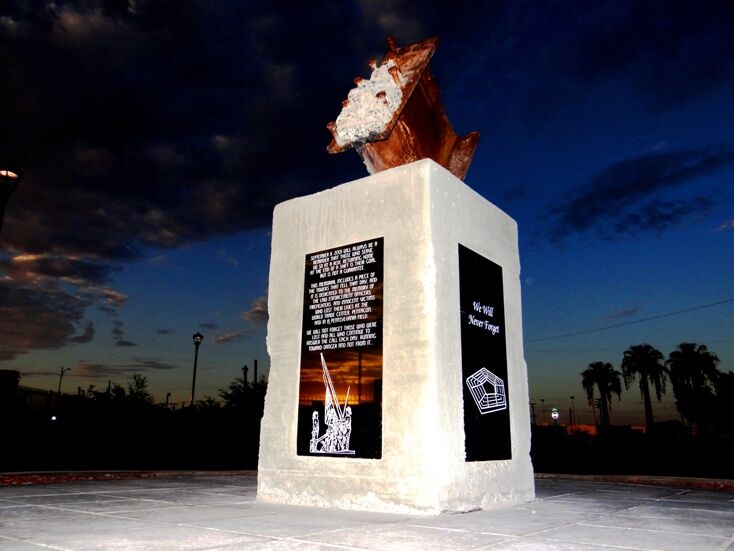 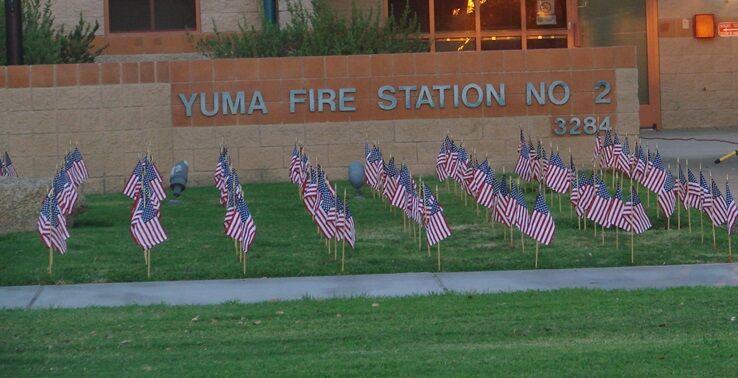 Since the first anniversary of the terrorist attacks on 9/11/2001, a special tribute has been made to the firefighters who died that day. At Yuma Fire Department Station #2, 3284 South Avenue A, 343 flags will be placed on the lawn along Avenue A. One flag for each of the 343 Firefighters that gave their lives in the collapse of the towers of the World Trade Center while attempting to rescue those injured and trapped in the initial attacks.

On the 10th anniversary of the attacks, 72 additional flags were added in memory of the 72 law enforcement personnel who also gave their lives in service to others on that day. In previous years the flags have been put in place the day before and taken down the day after 9/11. This year the flags will be in place for a full week, going up on Tuesday September 7th and taken down on Tuesday September 14th The flag display will be lit during the seven nights it will be in place.

Multiple events will be taking place on the morning of September 11th . Yuma Fire Department understands other groups and organizations will also be holding observances, but here are some of those YFD and the City of Yuma will be directly involved in:

The 4th Annual Memorial Stair Climb will be going on from 5:00 am until 7:00 am at 350 West 16th Street. This is an event put on by the United Yuma Fire Fighters Association (UYFFA). Local first responders, and military personnel, will be climbing the building’s staircases to symbolize those flights of stairs climbed by the first responders in the Twin Towers on 9/11. For more information on this event contact Aaron Wonders at aaron.wonders@yumaaz.gov .

A public 5K run will be taking place, with registration at 6:30 am on the Heritage Library Lawn, 350 S. 3rd Avenue. For more information, visit YUMAAZ.GOV/EVENTS. The run will end in time to be able to attend the Memorial Service at Fire Station #1. Proceeds from the run will go to the Tunnel to Towers Charity.

The 7th Annual Tunnel to Towers Moving Tribute will start at 7:45 am from Fire Station #3 (508 E. 25th St.) and will end at the 9/11 Memorial at Fire Station #1. Several YFD personnel will be making this run/walk in turnout gear and carrying an American flag to honor those who gave their lives that day. For more information on this event, contact Brandon Case at the “9/11 Tunnel to Towers Yuma” Facebook page.

In 2013 a 9/11 memorial was dedicated at E.F. Sanguinetti Fire Station #1, 353 S. 3rd Avenue. The 9/11 Memorial incorporates a 24”, 160 pound section of I-beam recovered from one of the Twin Towers. It was built by local construction workers and YFD personnel to honor those whose lives were lost at the World Trade Center, the Pentagon, and a field near Shanksville Pennsylvania.

On this 20th Anniversary, Saturday September 11th at 9:00 am, a special Memorial Service will be held at the location of the September 11th Memorial at Station #1. This year the 300 block of 3rd Avenue will be closed to traffic for the ceremony. The ceremony will include a “Patriot Day” proclamation, Patriotic Choir, Band, and Dance performances, as well as various static displays on 3rd Avenue. Refreshments and commemorative T-shirts will be available from the UYFFA.

Although some seating will be available, bringing your own is advisable. There is limited street parking in the immediate area of the station, however parking areas surrounding City Hall will be open.

Sorry, there are no recent results for popular images.

You can air-fry almost anything

T-shirts can be dressed up for many occasions