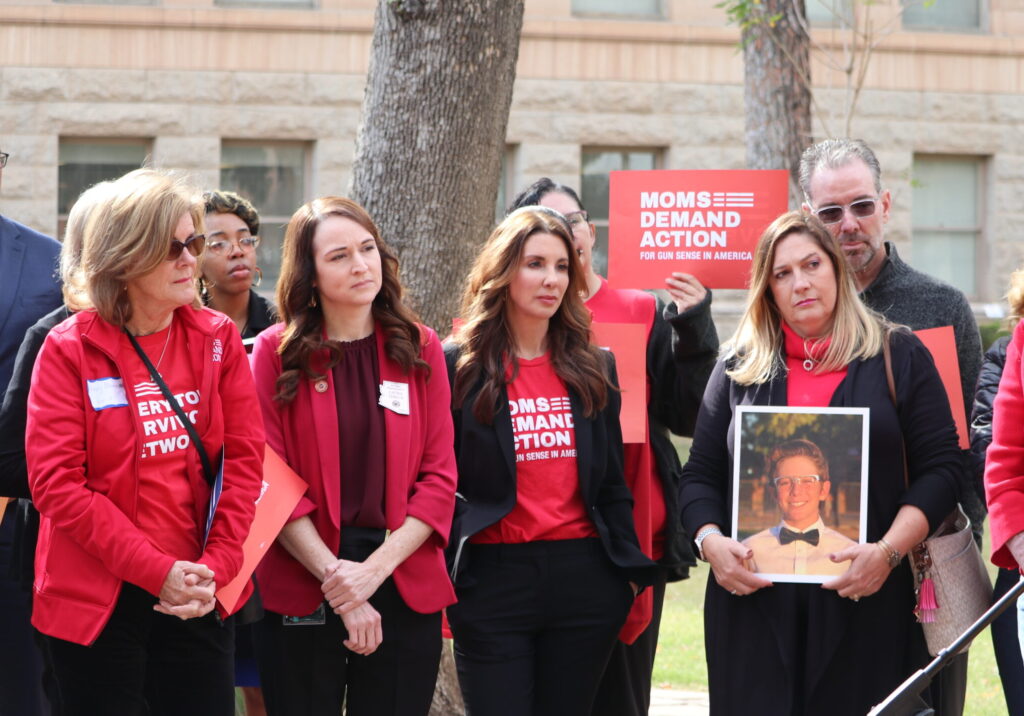 Gun control advocates, including Bruce and Claire Petillo at right, gather on the Arizona Capitol ground Jan. 23 for a day of engagement, organized by Moms Demand Action.

The lives of Bruce and Claire Petillo were forever changed on Sept. 5, 2021, when their teenage son went to spend the night with a friend and never returned after being killed in an accidental shooting.

Christian, according to his mother, was impetuous, fun loving and good at every sport he tried, much to the chagrin of some of his peers.

The 15-year-old from Gilbert had been shooting Airsoft guns, which fire plastic BBs, with his friends that day, and asked to stay the night with one of them. The Petillos agreed, unaware that there was an unsecured actual firearm at the friend’s house.

GET THE MORNING HEADLINES DELIVERED TO YOUR INBOX

The investigation into Christian’s death is ongoing, and the Petillos believe they’ll never know exactly what happened that night. But they do know that Christian was accidentally shot. A bullet entered his chest near his collarbone and exited around the opposite shoulder blade.

His parents got the news and rushed to the hospital, but the surgeon told them their son had no chance of survival.

“I was in complete disbelief,” Claire Petillo told the Arizona Mirror. “I was in shock. I never thought this would happen in my wildest dreams.”

The Petillos don’t keep guns in their home, and although Christian had previously asked to go shooting, they told him they’d take him to a range and teach him gun safety after he turned 16. He was about six months short of that milestone when he died.

As a way to deal with their anger and grief over their son’s tragic death, the Petillos are working with legislators at the state and national level to advocate for what they believe are common-sense gun laws. They said they are driven by the hope of protecting other families from enduring the agony of losing a child in the same way, so young and so suddenly.

Christian’s Law, introduced this year by Democratic state Reps. Jennifer Longdon and Jennifer Pawlik, would require gun owners to keep either their ammunition, their gun or both in a locked storage container, or to fit their firearm with a device that would render it inoperable without a combination or key.

When the gun is not secured, the owner would be required to keep the firearm and ammunition on their person, or in extremely close proximity.

Those who violate the law would be subject to a civil penalty of at least $1,000.

Bruce Petillo views Christian’s Law as similar to seat belt or drunk driving laws, which have both been credited with saving countless lives.

Those who store their guns carelessly should be held accountable for that, Bruce Petillo said.

“What you have in your possession can take a life in an instant, and there’s a responsibility that goes with that,” he said.

The Petillos were at the Arizona Capitol on Monday, along with more than 100 other volunteers and gun safety advocates from Moms Demand Action and Everytown for Gun Safety for a day of engagement with state officials and lawmakers.

More from this section

Longdon, who was paralyzed in a drive-by shooting in Phoenix 19 years ago, has introduced a suite of gun control bills that would: eEstablish a process for the surrender of a concealed weapons permit after a felony or domestic violence conviction; allow a court to prohibit a domestic abuser from having a firearm, if the court grants an order of protection against that person; require a three-day waiting period between the purchase and receipt of a gun; require that sales or transfers of guns take place through a licensed gun dealer; create a framework for filing a “severe threat” protection order when the accused has made death threats and allow for a firearm to be taken from that person; and increase the age to legally own or carry a firearm to 21, up from 18, with certain exemptions, including for hunting and for members of the military.

Terech has also introduced bills that would exempt school building blueprints from public records requests and would require school districts to involve students, parents and school employees in their safety plans.

In 2020, more than 45,000 people in the U.S. were killed by guns, but more than half of those deaths were suicides, according to the Pew Research Center. Advocates on Monday also mentioned the disturbing frequency of mass shootings, with a shocking 39 mass shootings in the U.S. since Jan. 1. The most deadly so far just happened over the weekend in Monterey Park, California, and left 11 people dead and nine more injured.

Longdon has proposed gun control bills in the past that she said were blocked by the powerful gun lobby, but she hopes that Christian’s Law will garner bipartisan support.

“When you send a child off to a sleepover, you should expect them to come home; it’s as simple as that,” Longdon said in a news release. “This year and every year I’ve been here, we have introduced common-sense ideas, broadly supported by the public, that would save lives. None would infringe on the Second Amendment in the least. But each year we face a blockade that is backed by money and power, not logic.”

Shannon Watts, the founder of Moms Demand Action, praised the group gathered at the Capitol on Monday, saying that their efforts had helped to block National Rifle Association-backed legislation proposed in the legislature last year that would have expanded where people with concealed-carry permits could carry their weapons, require that schools provide firearms safety courses from the NRA to middle and high school students and would prohibit public entities from entering into contracts worth more than $100,000 unless the contractor certified that it does not discriminate against firearm businesses.

In addition to their time meeting lawmakers at the Capitol, the gun control advocates also planned to deliver a “Soul Box” to each legislator. Soul boxes are origami boxes, each designed to represent a person killed by gun violence. The advocates planned to give each legislator a soul box representing a person killed by gun violence within their own district. 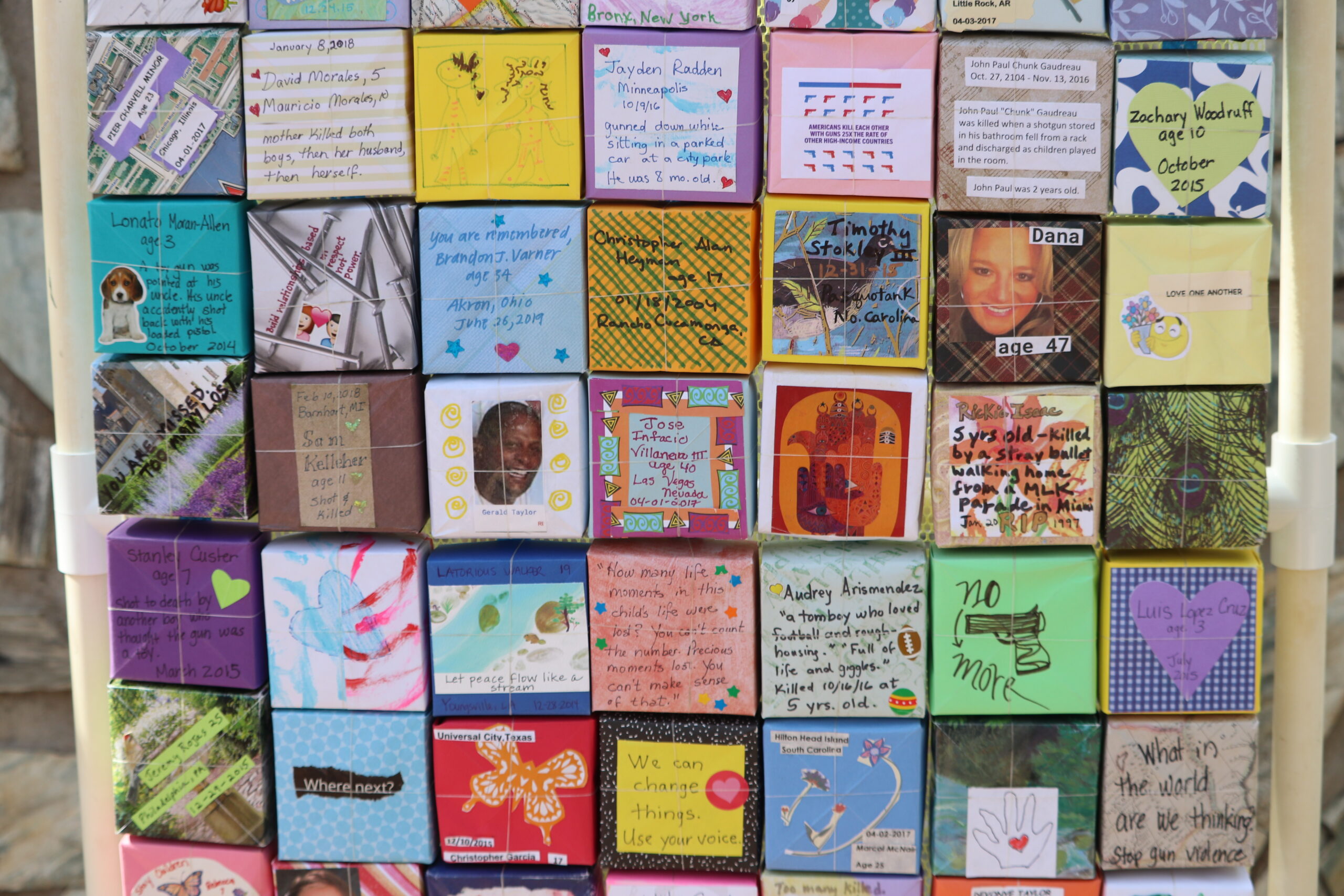 It can happen to anyone

Christian’s death left a hole in the lives of the Petillos, their other two grown children and Christian’s 6-year-old niece, and Bruce Petillo said it can never be filled.

“It’s all the future memories,” he said. “Every birthday, every holiday, wedding, every milestone,” that Christian is not here for is a painful reminder to their family of what they have lost to gun violence.

“When we see friends’ and family’s kids who are the same age, celebrating all those milestones, you’re happy for them but you grieve for your loss at the same time,” Bruce said.

He wants those who balk at gun control measures to know that this can happen to anyone. Gun violence wasn’t something the Petillos ever considered as a concern for their son before it killed him.

“This is not political, it’s about human life,” Bruce said. “If every gun owner was as responsible as they say they are, we wouldn’t be having this conversation.”

The post Parents of teen killed in accidental shooting hope ‘Christian’s Law’ will save lives appeared first on Arizona Mirror.

Originally published on azmirror.com, part of the TownNews Content Exchange.